BIOHOME is a highly efficient biological filter media manufactured from sintered glass. It can house billions of beneficial bacteria which aids in the elimination of substances which are toxic to fish, such as ammonia, Nitrite and also Nitrate. BIOHOME is by far the most functional and cost effective aquarium filter media available. Beneficial bacteria attaches and lives in BIOHOME far more effectively than on plastic and other media. By doing this, BIOHOME promotes 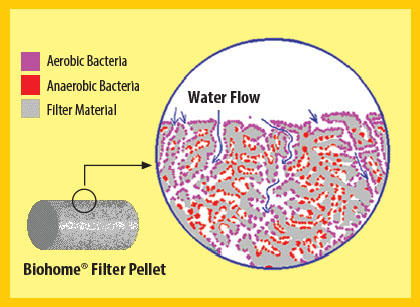 faster growth and colonisation of this good bacteria which is the key to healthy water free from toxins such as ammonia, nitrite & even nitrate.

BIOHOME is safe, not harmful to fish and can be used in fresh water as well as salt water environments. BIOHOME will not have any effect on water pH or change the mineral balance in your aquarium. It is also the most efficient and cost effective biological media available for Nitrosomonas, Nitrobacter, and other beneficial bacteria which adapt themselves to function in abnormally low oxygen conditions.

Nitrosomonas is a bacteria organism which oxidizes ammonia (caused by fish waste, uneaten food etc) into nitrite as a metabolic process. Nitrobacter also plays a very important role in the nitrogen cycle by then oxidizing nitrite into nitrate – essential in the ‘cycle’ process of an aquarium. It is this nitrogen cycle which keeps fish alive and healthy. Fish will not survive long without this critical cycle process taking place. BIOHOME assists in this process more effectively than other media.

The structure of the sintered glass particles ensure excellent water flow through each individual BIOHOME pellet. This reduces the clogging from waste which you find in other porous filter media. When media get clogged with waste particles, it’s efficiency is reduced substantially. BIOHOME allows water to flow freely around and through the media reducing clogging, giving more room for beneficial bacteria to grow & live. 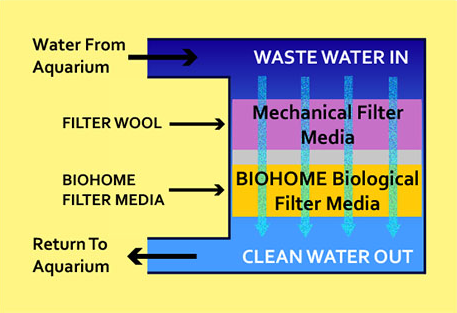 Why Should I Use BIOHOME?

BIOHOME aids in the elimination of toxins such as ammonia, nitrite and nitrate. Other filter media products can assist (although not as effectively) in minimizing ammonia and nitrite but are not effective in dealing with nitrate. This is why regular water changes are critical for eliminating the nitrate. BIOHOME is different as it can minimize not only ammonia and nitrite but also assists in eliminating nitrates as well. When using BIOHOME, your need for water changes are substantially reduced resulting in a healthier environment and less stressed fish. Better for your fish and better for you – less maintenance!

With an amazing porosity of 40.5%, BIOHOME has an unequalled specific surface area of 560 m2 per 1kg. That is equivalent to more than 2 full-size tennis courts. Compare this with plastic bio balls which is less than 20 m2 per 1kg. BIOHOME has almost 30 times the surface area of bio balls. When you consider that plastic bio balls are also lighter, you need considerable more volume of space for 1 kg of bio balls than 1 kg of BIOHOME. This is a considerable amount of space saved in a filter when using BIOHOME. You can immediately see why BIOHOME is far superior and why results can be achieved like no other bio filter media.

With the massive surface area in BIOHOME, you can say goodbye to huge and chunky biomats, bioballs, etc. This high surface area allows us to effectively treat large amounts of aquarium water with 1 kg of BIOHOME. All you need is a very small compartment for biological filtration! As a guide, 1kg of BIOHOME = approx. 1.25 Litres in volume. 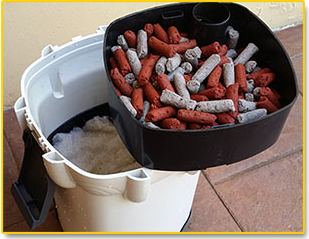 Premium water quality through the use of an effective natural and environmentally safe biological filter is essential for the good health of fish and plants, and to eliminate dissolved nitrogenous compounds.

With BIOHOME, you can be confident that generous colonies of both aerobic and anaerobic bacteria will be available to purify your water at all times.